Does James Contradict Paul Regarding Faith 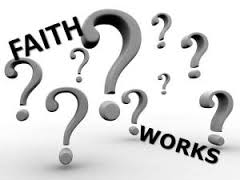 Introduction*
Unfortunately, due to the fact that many of us do not understand koiné Greek we are unaware of many grammatical principles which alter the understanding of some verses when translated into the English vernacular.

Due to not being aware of this Greek grammatical principle divisions have been created within the English-speaking church, to the extent that denominations have been severed concerning such teaching as “works as a part of faith,” as opposed to “faith alone” regarding salvation, as well as the Christian walk. 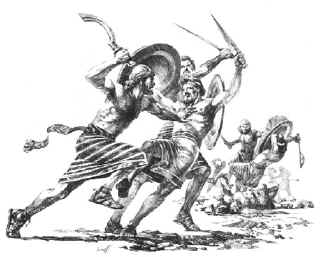 One of the main texts that have been used to assert that works are necessarily a part of faith is taken from James 2:21, which would appear to indicate that Abraham was saved not by faith alone, but when works were added, as seen in:

James 2:21 ~ “Was not Abraham our father justified [Greek: dikaioo] by works, when he had offered Isaac his son upon the altar”

In this passage, James is referring to Abraham’s offering of Isaac as proof of his faith which is referred to in Genesis chapter 22, when Abraham was over 125 years old, perhaps even 130 years old (Making Isaac at least thirty years old, and as far as some topologists are concerned, Isaac would’ve had to be thirty-three years old to fit the typology [“shadow” Col. 2:17; Heb. 8:5] of Christ’s crucifixion). Yet, we understand that Abraham’s saving faith in which God counted it “for righteousness” occurred over at least forty years prior to this as recorded in:

Genesis 15:6 ~ “And he believed in the LORD; and he counted it to him for righteousness.”

Therefore, it is impossible for James to be stating that Abraham was saved by faith when he offered up Isaac more than forty years after Genesis 15:6, which is when he displayed saving faith (In which God counted it as righteousness) by believing God’s promise concerning becoming a mighty nation, by first having a physical son of his own.

What is easily understood especially in light of the Greek grammatical principle concerning Greek verbs ending in “oo”, is that James is stating that what was already on the inside of Abraham, saving faith in God, was fully displayed in the act of him being prepared to take the life of his son according to God’s direction.

Here, Paul is quoting from Genesis 15:6, when Abraham was around 85 years old, and is being justified according to his faith by God. Paul uses the same Greek verb for justifieth, indicating that he then was exercising that faith that had already dwelt on the inside concern in God and his promises.

We must remember that it was God that ten years before had instructed Abram to leave his home and relatives to go to a new land that God would later show him. Abram delayed his departure until his father had died (According to Stephen ~ Acts 7:4), then disobeyed God by taking his nephew Lot with him.

So though Abraham had faith in God, it had not matured to the place of confidence that would mandate obedience. Yet, the scripture is quick to tell us that it was his belief in God’s promise, not Abrams works wherein God saw his heart and imputed righteousness to him.

We understand that justification is God’s declaration that a person be treated as if he is innocent of the charges made against them. It is a declaration of immunity, being acquitted, not a pronouncement based upon evidence, but in spite of it. In reference to justification, Paul declares in:

Romans 4:1-11 ~ “What shall we say then that Abraham our father, as pertaining to the flesh, hath found? For if Abraham were justified by works, he hath whereof to glory; but not before God. For what saith the scripture? Abraham believed God, and it was counted unto him for righteousness. Now to him that worketh is the reward not reckoned of grace, but of debt. But to him that worketh not, but believeth on him that justifieth [Greek: dikaioo] the ungodly, his faith is counted for righteousness. Even as David also describeth the blessedness of the man, unto whom God imputeth righteousness without works, Saying, Blessed are they whose iniquities are forgiven, and whose sins are covered. Blessed is the man to whom the Lord will not impute sin. Blessed is the man to whom the Lord will not impute sin. Cometh this blessedness then upon the circumcision only, or upon the uncircumcision also? for we say that faith was reckoned to Abraham for righteousness. How was it then reckoned? when he was in circumcision, or in uncircumcision? Not in circumcision, but in uncircumcision. And he received the sign of circumcision, a seal of the righteousness of the faith which he had yet being uncircumcised: that he might be the father of all them that believe, though they be not circumcised; that righteousness might be imputed unto them also”

Therefore, what James says in James 2:21; agrees with Paul says in Romans 4:1-11 (As well as Ephesians 2:8-9); whereas James states that Abraham displayed (What was on the inside was exhibited on the outside) his saving faith by his work (Deed), of trusting God when he was preparing to present his son as a sacrifice, this was 40-50 years after he was already saved by his faith in God as recorded in Genesis 15:6 (Paul states in Romans 4:3; 4:9; Galatians 3:6, that Abraham received his salvation when he first exercised faith back at Genesis 15:6), and Paul stated Abraham it was this same faith that was counted for righteousness unto salvation.

James says the act displayed what was already on the inside, and Paul that the inside created the act that was displayed on the outside.

Other Example of the Verb
Another example concerning Greek verbs ending in “oo” (Which indicate that what is already on the inside is then displayed on the outside) can be found concerning the Transfiguration of Christ as recorded in:

Matthew 17:2, regarding the Transfiguration of Christ, where the word: “transfigure“ (Greek: metamorphoo), means to change the appearance or form, yet it does not denote the change of the substance of that thing, but simply its appearance (With the use of this word, transfigure, we are forced to focus on Christ’s physical appearance).

And with the verb utilizing the “oo,” ending we further understand that the change referred to here is to display the radiance of his glory physically, exhibiting what is already on the inside, to the outside, which is Christ’s Divinity in visible form.

John 1:14, which speaks about Jesus in carnation, states that he “tabernacled“(Greek: skennoo), also translated: “dwelt among us.” As seen from above, with this Greek verb (Such as tabernacled) ending in “oo“, it indicates that “what is on the inside is displayed on the outside.”

The verb is used here concerns Jesus being made flesh, in regards to Him displaying in His behavior (on the outside ~ in regards to the use of the word tabernacled among men, we are forced to focus Christ’s behavior), that which had already existed in His essence, His Holiness as the only begotten Son of God, the “Word (Greek: Logos: “the literal communication”) of God, Personified.”

What we must also understand concerning this word, strengthened (Noticed that it is past tense in the English), is that in the Greek grammar, it is in the passive voice, meaning that the person receives the power from another, not from themselves; and that it is in the aorist tense, meaning that the action occurred in the past (It occurred “Once & for all.” The action occurred or was made possible when Jesus died on the cross, giving the opportunity for the Holy Spirit to indwell the believers according to salvation as adopted sons of God) and it is in the indicative mood, meaning that it is a complete certainty (A reality ~ it is a done deal, completed).

Back to our texts – therefore, with this in mind, what these verses (James 2:21 and Romans 4:1-8) indicate is that by becoming a believer and therefore having the indwelling of the Holy Spirit, there is power available to the believer which indwells on the inside and should be displayed on the outside. (This is what true witnessing is all about; this is what 1 Peter 3:15 also alludes to as well.)

These types of passages which use Greek verbs ending in “oo” are simply stating the fact that the outside is then – showing what is already going on the inside (They are not saying that there is only an exterior application, but that there is an interior meaning that is expressed in the exterior as well – see Endnote #2).

Endnote
1. If you use a Greek Parallel Interlinear New Testament, you will notice that the spelling for the verbs referenced above (Justification, transfigured, dwelt, and strengthened) in the Greek language do not display two “oo,” just one. This is because in a Greek Parallel Interlinear New Testament, the Greek words are combined into cognates and not distinguished individually.

Thayer’s Greek Dictionary is used concerning the above translation (This may not apply to certain deviant Alexandrian Codex utilized in a few of the modern translations; these text also modify passages concerning the Deity of Christ, and other Orthodox doctrines, yet they are unable to delete all scriptural basis for these doctrines, as even these deviant translations cannot completely change the Greek wording. If any of your current Bible translations omit the double “oo“, please forward this to me, and I will personally give you background information for greater clarity, and also I am doing ongoing research concerning these deviant Alexandrian Codices, as well as any Word Studies or Dictionaries which utilize them for their source material New Testament translations).

2. Concerning grammatical reference to the utilization of “oo” in Greek verbs wherein its usage “indicates that what is already present on the inside is then displayed on the outside;” Dr. Wayne A. Barber’s book, “The Surrendered Walk,” page 28 gives reference, as well as other Greek guides and books and which teach Koiné Greek of the first century.

“The difference between ‘involvement’ and ‘commitment’ is like an eggs-and-ham breakfast:
the chicken was ‘involved’ – the pig was ‘committed’.”